We’re having a shindig tonight at UCLDH to celebrate the success of Textal. A project isnt a success without a glass of wine, right? And some cupcakes!

We have ten goodybags to give away to our friends online who cant make it to the party. All you have to do to be in a chance to win is to share a wordcloud that you have made with textal on twitter, today. Winners will be chosen at random from those who join in. We’re not sure the cupcakes will last long enough to be put in the post, unfortunately… 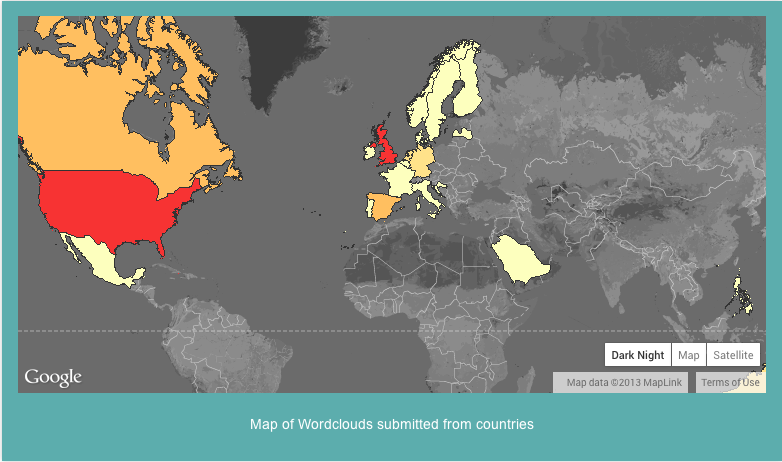 Almost three months since we flicked the switch and went live – how are things going? We’ve now had more than 70 million words submitted by users, and have had submissions from 28 different countries, as you can see above. One of the things we are doing is looking at uptake and use, and our settings mean that (if those using Textal allow) we can see where it has been used. About 2/3rds of users let us see this information, which is helpful to show the reach and spread of the App.

Other things to report. We’ve had wordclouds created in 6 different languages. The content being put through the server broadly breaks down to 1/3 books, 1/3 websites, and 1/3 searches from twitter, with a slight bias towards twitter, but this indicates the different needs of users (personally, I had predicted that the twitter search would be much more popular than the books, for example – showing we need to understand user needs more).

We’ve being going through phases of leaving Textal to its own devices, and then activitely engaging with social media about it, promoting it with various hashtags, at events. etc. Unsuprisingly, it ticks over when we dont promote it, and there are spikes in downloads when we are being more active.

To celebrate a succesful launch, and the ongoing success of Textal, we’re having a drinks event at UCL Centre for Digital Humanities on the 2nd of October. There are a few places left but they are going fast- do sign up here and join us in having a few drinks to toast our adventures!

Well. I’m not sure what we all at Textal Towers expected when we pressed “go public!” on the 9th July. Textal was built on an idea, a hunch, and a belief that it would be a useful addition to what is already out there for iOS… so what has happened?

Between the 9th and the 18th of July, Textal was downloaded to 429 different devices from iTunes.  17,042,109 individual words went through the Textal servers, making 419 word clouds created by 189 individual users. 6 different languages were used: most clouds were made in English, but there were also 14 in Spanish, 9 in French, and a handful in Dutch, Italian, and German. We made the top 100 apps in “Education” in two different countries – the UK, and Portugal (where we were in the top 40!).  About half of the people using Textal have allowed us to see their geolocation – so look forward to a map, next blog-post around.

I’m very pleased with this. Its really hard to measure “success” when it comes to this kind of thing, but I watch the counter go up by over a million words processed every day, and think – our hunch, our idea, our belief? worth doing.  At time of writing, more than 32,000,000 words have gone through Textal in the space of just a few weeks, and I’m watching the stats rack up of various clouds being looked at and shared. We very much wanted to show text analysis to a mass audience – and we have evidence to show that people are looking at, and using, the tools that we have provided. We’ve also found a few bugs, and a few usability issues that we need to address – all part of the learning curve – but that is to be expected. (If you do have any issues, please let us know, so we can fix them for you and for others).

What fun. And I think… how can we get the word out further? If you have downloaded Textal, if you are following us on twitter, please do help us to tell others.

Meanwhile, we are quietly smiling as we see people downloading, using, and talking about the app we spent so long tinkering with. Thanks! 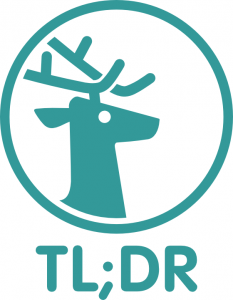 We’re really pleased and proud as punch to say that Textal is now ready to download for free over at the app store.  What are you waiting for? Go over and play with it as soon as you can!

The launch is the culmination of two years of very hard work, and I would like to thank the team behind Textal, Steve, our developer extraordinaire, and Rudolf, our designer par excellence. Together we’ve burned the midnight oil, learning a lot about the intricacies of app development and design, whilst pulling together an innovative and useful introduction to text analysis for a mobile audience.

Over the next few months we’ll be exploring here how Textal was built, how the back end works, what you can do with it, and how it is being used.  Its been a great experience so far, and now we are buckling our seatbelts as we throw it open to you to play with. We’ll be keeping you up to date here, and on @textal on twitter.

And please meet Grendel, our teal deer. Too Long; Didn’t Read (TL;DR)? Use Textal to summarise and explore the text for you!

We’re into the final stages before we release the app for alpha testers. It looks now like we are going for a release on the app store at the start of September – fingers crossed. In the meantime, the lovely people from NCRMUK (who fund the grant that pays for Steve’s time) made a preview video of where we are with Textal. Enjoy! 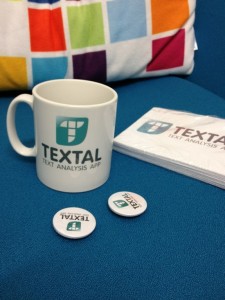 Things have been quiet around here (Steve and I both went on leave for a while) but we are now getting to the final stages of making the app. We hope to push a version out to users, for testing, in the next week or so. I’m now looking at lists of words which are used on … do you call them buttons when they are embedded into an app? … so we can think about translating the interface into other languages. And lookee here, a big batch of textal promotional items arrived, so we can start to crank up the promo machine.

But. The launch has to be put back. We would have had to get it into the app store round about now for that to happen – which we could have done, but we would have been really having to go some. Doable, but stressful. However, that wasn’t the limiting factor. We’ve been trying to set up an account on the App Store which would mean we could release this as UCLDH and UCLCASA – but we are mired in legal identities, UCL agreements, and who gets to assert the copyright on Textal, etc etc. We think we have found a way forward – and we are getting our ducks in a row to fight the good fight as far as copyright and IPR is concerned (it may be a free app, but we cant give away our copyright to someone else) – but it is funny how something like that can derail the time frame for the launch of a project.

So our room booking for the launch is cancelled. Not to worry, we’ll make a new one once Textal is up in the Apple Store, hopefully within the month.  We’ll keep you posted with progress, now we are back on the case.

Hi! I’m Melissa Terras – Co-Director of UCL Centre for Digital Humanities, and Reader in Electronic Communication in the Department of Information Studies there. I’ve been involved with a variety of software development in the Humanities over the past decade, but I’ve never made an app before.

But why tackle word clouds? You’ll be familiar, no doubt, with text clouds – a basic visualization of word frequency in a given text as a weighted list – and probably wordles, the online text-cloud generation tool developed by a programmer at IBM in 2008. There’s no doubt that these can be kinda – sorta – useful visualisations of texts (there’s even been research into their usability). But those working in the field of Digital Humanities – the use of computational methods and approaches to undertake research and teaching in the Arts and Humanities – tend to sneer (rightly or wrongly) at wordles.

Text Analysis by computers has been a technique used in the Digital Humanities since the very earliest days of computing.   There are many pretty well understood techniques to look at things like authorship attribution, gender based bias in language, etc. Wordles are so basic in comparison. We know about word lists and stop words and frequency and concordances and… we can do Text Analysis! Why would you use Wordles? Now, there are some pretty good online tools to undertake Text Analysis in a serious fashion, such as Voyant (http://voyant-tools.org/). But there is a step change between wordles and these tools, with nothing in between.  There hasn’t been, to my knowledge, any linking up of word clouds with the underlying statistics of the text that we normally associate with Text Analysis. Wouldn’t it be cool if we could take a word cloud, and let people click on words of interest, and drill down into their text to see the actual statistics that underpin it? This action would also lend itself to the pinch and stretch paradigm on smartphones.  We can fix wordles, and make them robust, useful, interactive…

So the idea for Textal was born. The name, and the logo, came later. First I had to find the funding to undertake development (I had initially thought I would learn how to do it myself – its been a while since I’ve done some coding, and wouldn’t it be fun! But I quickly realized that that wasn’t feasible with my other duties and current hubbub at home).  I also had to find a research collaborator who would help me out. But those, my friends, are all stories for another blog post…